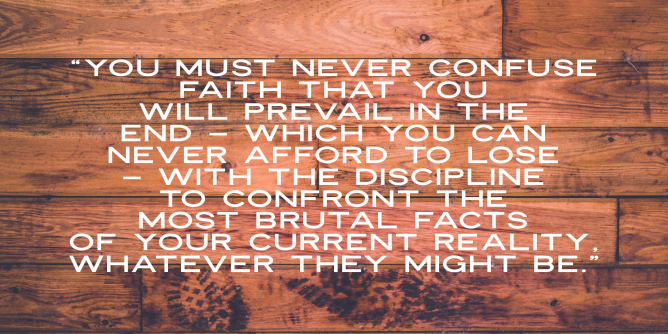 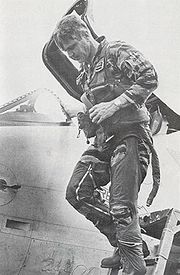 Deal directly with your current unpleasant reality but never lose faith that you will prevail. This is the essence of the Stockdale Paradox. It can change your life.

Whenever I get the chance to lead a new team, the first book I share with them is Jim Collins’ “Good to Great”. In it, Jim and his gifted group of inquisitive smart people dissect the commonalities that make for uncommonly great long term performance. If you don’t yet own this book, go out and buy it immediately. If you do own it, turn with me now to the section where Jim outlines The Stockdale Paradox.

Back in the mid ‘80s, I was working as the marketing guy for Continental Cablevision on Washington Square in downtown Lansing, Michigan. Part of my daily ritual was listening to Dick Estell’s Radio Reader program on WKAR.

One winter, I was riveted by Dick’s reading of Admiral Jim Stockdale’s story of the seven years he spent as the highest ranking prisoner of war at the Hanoi Hilton. Titled “In Love and War”, with alternating chapters written by his wife Sybil, Stockdale took me through his excruciating experience of physical and emotional torture at the hands of the North Vietnamese. And how he inspired the POWs to continue to fight from within the walls of their prison.

“In Love and War” is still in my personal library, well worn from many readings, so when Jim Collins introduced his readers to The Stockdale Paradox in “Good to Great”, I paid particular attention.

In a nutshell, The Stockdale Paradox is this:

“You must never confuse faith that you will prevail in the end – which you can never afford to lose – with the discipline to confront the most brutal facts of your current reality, whatever they might be.”

If there was ever a touchstone for the challenges our world faces today, this is it.

Here’s the current reality: Whatever you do for a living, it’s likely that the economic foundations that underpin your gig are tenuous. Layoffs and cutbacks are inevitable. We are being asked to do more with less. There isn’t enough budget money to get the job done the way we’ve done it before. And the debate about strategies and tactics to get us where we want to be doesn’t reveal a clear pathway.

By the same token, The Stockdale Paradox applies to the service organizations you support. They will have their ups and downs. There will be moments when the leadership loses it’s way, when volunteers feel unappreciated, when membership dives.

Jim Stockdale’s advice? Deal with it.

As Jim Stockdale realized, prevailing is not something that happens in the script of a two hour movie. It’s an iterative process, full of steps forward and backward, dead ends and rabbit holes. It’s the day-to-day energy you must invest to survive and thrive, no matter what. In the end, Stockdale did prevail and he felt that his seven years as a POW were the defining years of his life, “something, in retrospect, I would not change”.

Viktor Frankl discovered something similar while immersed in the horror of the Holocaust during the Second World War. In his seminal work “Man’s Search For Meaning” he says, “Most men in a concentration camp believed that the real opportunities of life had passed. Yet, in reality, there was an opportunity and a challenge. One could make a victory of those experiences, turning life into an inner triumph, or one could ignore the challenge and simply vegetate, as did a majority of the prisoners.”

How many vegitators do you know?

Something that both Frankl and The Stockdale Paradox share is faith that daily contributions would ultimately lead to a productive objective. Perhaps not the same faith we speak of on Sundays but something very similar. As C. S. Lewis puts it, “The virtue by which we hold to our reasoned ideas, despite moods to the contrary.”

So what does all of this stuff mean to you? And how can you use The Stockdale Paradox to your advantage.

Whatever your current situation… Deal with it!

The greatest opportunities lie in the darkest moments.

What data do you need to analyze where you are now with the cold unbiased eye of a consultant? If you left your body and looked at your world as a witness, what opportunities do you see? And how can you engage to maximize them? Who can you collaborate with to find win-win scenarios for both sides? How do you assess your fitness to survive and thrive in this uncomfortable current reality? What strengths do you bring? What skills do you need to develop? Who can be your teachers? Who can travel with you and add value along the way?

And what can you contribute, beyond your work relationships to help those community causes you care about? What are those things beyond career and family that epitomize for you Churchill’s maxim, “We make a living with what we get but make a life by what we give.”

Ponder the questions carefully. Write them down and answer them honestly. They will give you a clear and realistic, if painful, picture of your current reality and will help you begin to develop game plans to grow.

Think about the big picture where you work. How can your contributions help the larger team not only survive but thrive? Believe it or not, the women and men in charge are feeling the same discomfort in the pits of their stomachs, and will value any helpful input from any source that might make a difference.

You could make that difference.

And don’t give up. History is littered with stories of how “the race is not always to the swift, nor the strong, but to those who persevere.”

As Emerson wrote, “Our greatest glory is not in never failing, but in rising up every time we fail.”

So get up and start the race anew.

Keep The Stockdale Paradox in mind as you face the week’s challenges. Be aware of the power of perseverance. As Bill Feather says, “Success seems to be largely a matter of hanging on after others let go.”

Deal with your current reality. Keep the faith that you will prevail. And you will.