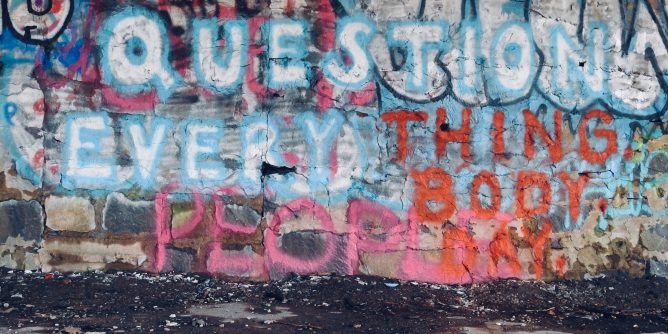 A paradigm can either protect us from harm or blind us to danger. Re-validating that which we believe to be true is the only way to know the difference.

Our paradigms are built on points of pain and pleasure that inject our minds with assumptions. And we know what can happen when we assume.

Take the difficult conversation going on around the immigration issue. Dave Pell writes, “politicians and the media are fueling a debate over what to call the facilities where asylum seekers are being held detention zones? concentration camps? internment centers?”

As you read that statement, my guess is that you had some sort of visceral reaction. Anger that people refuse to follow the legal path to citizenship? Compassion for the circumstances that forced them to flee their current situation? Helplessness; not being sure what the right solution is?

The issue of border security is complicated, costly and very hard to manage. The lens through which we view the issue determines our point of view and is focused by our own experience.

We have paradigms for every significant challenge we face today, from climate change to international competitiveness. Our opinions are based on what we have personally witnessed. This happens directly as a result of life events or as the product of the ideas and images we feed our brains. That diet includes the news channel we watch and the social media messengers we follow.

What many don’t understand is that what we are told might not be the truth.

The first rule of media literacy is this: “All messaging has a point of view. Challenge it.” Where your paradigms are concerned, challenge them too.

That’s uncomfortable. We naturally vector away from discomfort and toward comfort. We don’t like it when the “facts” that are the foundation of our belief systems are questioned, especially when they have popular support among our friends and colleagues.

At the same time, outdated or incorrect paradigms can have a profound impact on everything from your career to your circle of friends.

The current political climate plays to the high emotion we connect to our paradigms. When we are triggered, we may say or post something that punches a hole in a value someone else holds dear. I’ve heard our current divide compared America during the Civil War. Families and friendships are torn asunder because we’ve forgotten how to productively disagree.

Media business models are built on fueling these emotions. “If it bleeds it leads” is still the prime directive for news programs. Creating 240 character sound bytes that inflame others on Twitter and Facebook is a high art and it is most often practiced by groups that hope to control us to further their ambitions.

How can we exist in this troubled environment?

Questioning our paradigms, what we perceive as truth, is an essential exercise. Because things are usually much more complicated than they at first may seem to be.

Fact check everything. Every website, every commentator and every individual is framing their message based on how they have filtered their own input. Seek out opinions that differ from your own and try to understand their basis. Find the courage to change your mind, even if the new belief runs counter to your current circle of friends.

Most importantly, have compassion for others. We cannot know their pain until we have walked their path.

Mission trips, an overseas exchange experience, cop ride-alongs and job shadowing opened my mind to the complexities of different cultures and lifestyles. A young friend spent a summer working with the homeless to better understand their world. Another who grew up under a totalitarian regime and is now a US citizen has been a fascinating resource, with heightened awareness to similar behaviors that exist in his current backyard.

The broader our exposure to diverse viewpoints, the better we can process today’s information inundation.

The best paradigms are built with the sturdy bricks of wisdom and not fear. They become a firm foundation for rational decisions, but are held together with the malleable mortar of courage; the courage to change our minds when new evidence is revealed.

On July 4th, one of my Facebook friends shared this quote from John Dickinson, one of America’s Founding Fathers:

“Then join hand in hand, brave Americans all! By uniting we stand, by dividing we fall.”

John Dickinson famously refused to sign the Declaration of Independence. One of the largest slaveholders in Congress, he ultimately changed his paradigm and freed them all in a time when the action was considered radical. His contributions to the Articles of Confederation ensured that Americans were defined as “persons” and not men, the first hint of the concept of equal opportunity we still wrestle with today.

The strongest friendships are often forged in the fire of productive conflict. I believe we can join hands, remain passionate about our point of view, and still be open to new ideas.

I hope you will pick apart one of your own more controversial paradigms in the coming week. Turn the prism through which you view the world. Walk in someone else’s shoes. Fact check your assumptions.

Whether or not a new pattern emerges, the exercise can clarify and enrich your thought processes. Better ideas and the confidence to make the tough decisions that often come with them will be your reward.