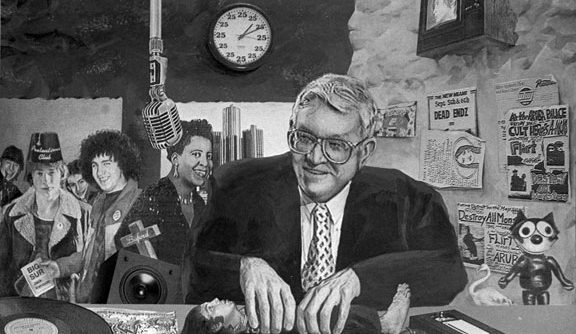 To inspire the next generation to reach higher, think deeper thoughts and do greater things. This is the stuff of immortality.

When Russ Gibb returned to his “spirit self as the purser on the Japanese steamer Mitza Maru sailing somewhere in the South China Sea,” many who didn’t now him only recalled how he amplified the “Paul Is Dead” story in October of 1969. I think he tired a bit of talking about that. Each fall, his name would surface again in news feeds and a fresh phalanx of journalists, bloggers and would-be Beatle historians bombarded him with letters, emails and phone calls.

The fact, he once told me, was that the whole thing was serendipity. We’ll talk about that later down the page.

But I think what Russ would want to be remembered for was being a teacher.

True, he worked for the Nixon administration, had fun skewering convention as a conservative curmudgeon and rubbed elbows with just about every famous rock and roller from the 60s when he got the idea to incarnate the Filmore in a dilapidated Detroit dance hall, immortalized as The Grande Ballroom. He was an artist and entrepreneur who spent the early years of his adult life living out of a second floor bedroom in his parents’ house, filling the place with famous names looking for somewhere to cool down after volcanic performances at the Grande.

He managed the MC5 for a time, bolstering their brand with under-card appearances across Detroit.

When the drugs and the crime began to invade his concert business, he dropped it cold turkey. And yet, he never lost his appreciation for anyone who pushed the edge of the envelope, sending his students to inner city venues to see punk rock concerts, investing in their own entrepreneurial start-ups before the term “angel investor” was invented, and reminding us all that innovation and disruption was where it was at.

He was a master of looking over the horizon and predicting the future. He paid cities a pittance for the rights to build community antenna television systems, later reselling his franchises to the big boys when Cable TV became a thing. He could talk big corporations like Sony into loaning him the latest video gear so his students could play with it.

He met the rich and famous but was never tempted by the often decadent lifestyle, playing Scrabble and Monopoly till dawn with the likes of Eric Clapton and Mick Jagger. He knew how to make money, but always did it in a way that added value for everyone involved. And when he became your friend, he never forgot you.

These are the dimensions of the man that most of the kids he taught never knew. They rarely could recount the topics of any of his lectures, but have vivid memories of how he stretched their thinking and encouraged them to step outside of their comfort zones.

He could embarrass you, but only if you were embarrassing yourself. If you said something stupid in class, he might make you stand at the door and yell it down the hallway, often a self revelation that transformed hormonal minds into thoughtful adults.

You learned from Russ by doing. “Go try it,” he would say, realizing that the kinesthetic approach of trial and error could weld new ideas into strong cables of enlightenment.

Russ had deeply held points of view. But he was also deeply interested in hearing others, never afraid to change his opinion when there were facts to back up an argument. He had an innate understanding of the power of engagement, regularly turning his microphone in the direction of the audience. “They often were more interesting and entertaining than I was,” he once told me.

Such was the case with the McCartney thing. Eastern Michigan University student, Tom Zarskey, had heard about it somewhere else, perhaps even from Larry Monroe, the evening jock at Ann Arbor’s WNRZ, who was ahead of Russ on the story.

Russ’ initial reaction was skeptical. Dylan had once been declared dead. It happened a lot in the churning rock and roll rumor mill back before Snopes was around to debunk things. As Tom started talking about the supposed message that was revealed when you played “Revolution Nine” backwards, of course Russ tested the thesis. What he and his WKNR-FM audience heard was chilling. And thus began a two hour conversation where clue after clue was revealed. Keener’s Frank Maruca came into the studio to ask Russ what was making the phones ring off the hook. “Whatever you’re doing, keep it up,” the Program Director said, echoing the Intelligent Flexibility philosophy that turned a weak also-ran radio station in Dearborn into a ratings juggernaut.

Russ would have kept doing it anyway.

He played the game to perfection in everything he undertook. But he was never an aggressive win-lose competitor. His colleagues at WABX, Keener’s main competition on the FM dial, remember Russ as an accessible, helpful ally. He always gave them access to the acts that came to the Grande. I’m not sure today’s entertainment oligopolies would do the same thing.

And he was just fine with staying out of the limelight. I sat with him at the last great Detroit Radio Reunion. It was Nellie Knorr’s last public appearance. Whenthe visionary owner who was thrust into control of her late husband’s radio portfolio after his untimely death, stood center stage with “The Keener Originals”, DJs who helped make the station great, the room erupted in a standing ovation.

Russ was happy to watch from the wings, even though his contributions were every bit as crucial to cementing the Keener legend in our minds.

Perhaps the greatest gifts we can receive are those we may never know about. Russ didn’t realize at the time that a University of Michigan student was listening that October evening. He was, inspired to write a “record review” for the Michigan Daily that is still referenced today as one of the first written aggregations of the McCartney Rumor. That was Fred Labour, the other name, included in the same sentence with Russ and Tom when the story resurfaces each fall.

Russ never met another UM undergrad, bereft of ideas for a presentation due in class the next day. The student heard his broadcast and took a pile of Beatle records to class, earning a 4 point in the process. That inspired Fred Jacobs to think that he might find fulfillment in the business of broadcast communication. In a sense, we owe the invention of the “Classic Rock” genre that Fred championed to Russ Gibb.

That’s just the tip of the iceberg. Russ’ influence will continue to ripple across the sands of time. His name may fade from memory. We all do eventually. But the essence of the man will live on, every time one of his insights is passed from generation to generation. An epic poem created by a renaissance man who was always much more interested in you than he was in himself.

Steve Schram and I had an extended conversation with Russ in 2003. Here’s an edited version of a visit we never wanted to end. And if you’re interested in more about how Russ Gibb amplified the “Paul Is Dead” story, “Keener Kills Paul” tells it all.