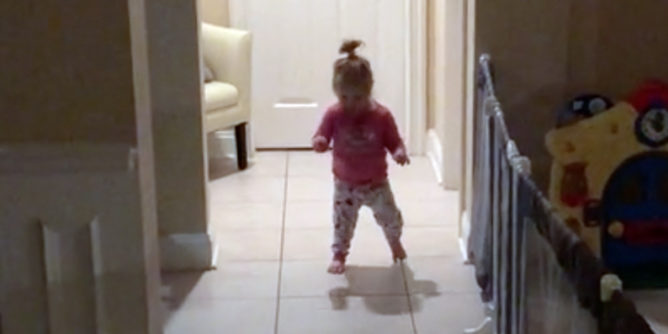 “Whatever we plant in our subconscious mind and nourish with repetition and emotion will one day become a reality.” ~Earl Nightingale

My granddaughter is an exquisite teacher. She is filled with fearless inquisitiveness. When something interests her, she wants to explore it again and again, until it becomes second nature.

At two and a half, she loves it when I pick her up. The higher perspective reveals a whole new world of wonder, ready for exploration. It begins with something as simple as a cupboard door. She will open and close it, again and again, studying the hinges, looking through the glass, feeling the contours of the handle with her fingers. She stays at it for twenty minutes, until, satisfied that she had gleaned all it had to teach, she turns her head toward something else, pointing at the next treasure, ripe for her attention.

As author, Daniel Coyle writes, “There is no substitute for attentive repetition.”

And so it was with Juliette’s experience learning to walk. For a long time, she preferred to scoot, using her feet and legs to pull her seated posterior wherever she wanted to go. If she was in a hurry, she would roll into an army crawl and shoot across the floor like a snake. Even as she began to gain confidence standing and taking a few tentative steps, she returned to her comfort zone, until the combination of encouragement and fascination with how much more quickly her legs might get her to her destination brought her attention to perfecting this new bipedal skill.

Initially, she could only take a few steps without holding our hand before plopping back down and returning to her comfort zone. But once she decided it was time to see the world from a standing position, falling down became little more than an inconvenience. She kept getting back up. Two steps became four. Four steps became eight. And in time, she was waddling around the house like a pro. We had to move the breakables above the three foot level. Her new found freedom had opened a fresh universe, ripe for reconnaissance and adventure.

What’s the difference between a child’s approach to discovery and ours as adults? Perhaps it’s our fear of failure; of being perceived as incompetent. Whatever the reason, if we want to continue to grow, we have to feel the fear and do it anyway. We have to be willing to try, fail, get up, process the learning and repeat.

The late Anthony Bourdain said, “We learn as professionals by repetition, by getting it wrong, getting yelled at and doing it again.”

Zig Ziglar puts it a bit more poetically. “Repetition is the mother of learning, the father of action, which makes it the architect of accomplishment.”

Welding concept into habit requires a tool box that includes desire, action and analysis, but the most important of these tools is repetition.