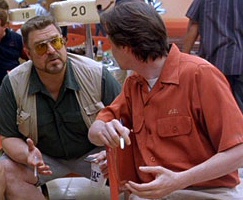 One of my favorite exchanges in The Big Lebowski is where Walter comments on Donnie’s strike with the statement “If you will it, it is no dream.” The interaction spirals out of control from there but Theodor Herzl’s quotation is never far from my mind whenever I’m talking with friends about what could be.

And so it was that I found myself at a small conclave of fellow geeks this week as the conversation turned to the survivability of newspapers. I was with two smart people, one who is a well known blogger in town and the other with direct ties to our local dead-tree daily.

I was stunned by the universal opinion that our local newspaper will inevitably crash and burn. These folks, who constantly push the edge of the envelope in so many other ways have come to the conclusion that you can’t make money with local journalistic content on the web.

I study this stuff and have had the good fortune to get to know a bunch of people who -are- making money in this space and began to tick off some of the tactics that they are using. What disappointed me was how quickly my compatriots wrote each idea off as untenable. I felt like I was watching them riding dinosaurs into the tar pits.

I thought of the third Buddhist spiritual law: The Law of Impermanence: Everything that arises, falls away or is transformed into something else. We’re in a world that’s constantly evolving. What works today likely won’t work as well tomorrow. Survival is directly connected to our ability to anticipate and adapt to the new realities.

People associated with something that has reliably delivered financial results for a long time likely subscribe to the “if it ain’t broke, don’t fix it,” approach. We’ve still got oil, we still watch American Idol, automobile dealerships still buy display ads in newspapers. So let’s not invest too much in transportation that don’t require petroleum, clone the Idol concept rather than inventing something new, and re-up the Ford guy for another year with the same number of column inches – don’t confuse him with this Internet stuff. When the results get flaky, downsize. Do the same thing with fewer people. Don’t invest in innovation.

I asked my son about this. He’s a web guy for a couple of TV stations and lives each day trying to figure out how to increase the non-traditional revenue that comes in through their Internet pipe. In his quiet, peaceful way he reminded me that, “The visionaries always make up a small part of the population.”

There are a magical few who are constantly turning the prism through which we all perceive reality. They see the brilliant colors in new ways, creating entire industries out of the shimmering rainbows that dance across the walls in the afternoon sun. Some reap huge financial rewards. But my guess is that all who view life in this way have much more fun.

I tell the people I serve to start from the premise that all things are possible. Work backwards from there. Charles Kettering’s wise counsel that “Our imagination is the only limit to what we can hope to have in the future,” was never more true.

Here’s hoping that more of my geek friends can develop that outlook.