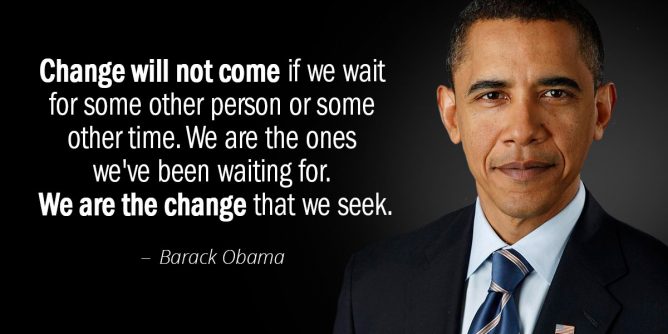 “I learned that courage was not the absence of fear, but the triumph over it.” – Nelson Mandela

I’ve been thinking about the President tonight. He is expected to make everyone happy. He won’t. Whatever he says or does, someone will attack it. He can articulate big dreams and strong voices will rise up in opposition. People will endeavor to curry his favor for their own personal gain and will abandon him the moment they no longer need him. Every decision he makes will be analyzed, dissected, second guessed and demonized. His every flaw will be amplified, magnified and vilified, distorting his message and giving ammunition to those who would destroy him.

And yet, he will get up every morning and do everything he can to make life better for people he’s never met. People who will misinterpret his motives and attack him, even as he reaches out to help them.

Look at your life ahead. How many of the things I’ve just said will apply? All of them. If you endeavor to make a difference, you will be tested. The extent to which you can summon the courage to continue will directly impact your ability to prevail.

In the end, it’s all about courage.

Courage is believing that the heaviest burdens are given to those who can carry the weight. It’s the realization that great things happen through passion and persistence, not position. It’s wrestling with your demons so you can hear the angels sing. It’s letting go of the familiar. It’s feeling the fear and doing it anyway.

If you decide to do great things, good things, anything, you will be attacked, second guessed, blamed and burdened. Life isn’t supposed to be easy. Great strength is the byproduct of great trial. Dreams grease the rails of progress. But it’s courage that fuels the fire.

It turns out that everyone has the ability to discover the courage within. The challenge is resolving to mine it’s treasures in the darkness.