Greatness is in the beholder’s eye. Deep dives always reveals flaws. No hero is unscathed. The challenge is to learn to love imperfection.

Romance Author MacKenzie Masters was asked about the many boyfriends she had before settling down. “I wanted to discard my ex-husbands before I married them.”

When pressed if she finally found Mr. Right, she admitted, “Far from it. I just learned to love imperfection.”

Nick Wilbur, writing on Medium, laments our habit of destroying our heroes. “One by one.. we’ve.. cut them down at the knee, ‘humanizing’ them, destroying the fire of their greatness that burned in our memories as children.

He goes on to say that we value people who walk the talk, who keep promises, who do good things, who live their philosophy.

In today’s world where social media can amplify faults to where they obscure contribution, we focus on flaws, especially when they reinforce our political views and diminish our own failures.

Everyone is a complicated mass of contradictions. For all of Hemingway’s greatness with the pen, he had lifelong demons that manifested in ugly ways. It was only after JFK’s death that tales of his womanizing started to diminish his Camelot image.

Despite best intentions, we all have demons that inhabit our nightmares, that try to trip us up as we pursue purpose and passion.

And we’ve all suffered. Many suffer right now, below the surface. Smiles of confidence hide tsunamis of uncertainty and doubt.

The trick is to accept imperfection and use it to fuel the desire to focus on the good.

“We come what we think about,” wrote Nightingale. Ponder the whole person. Look for the diamonds in the rough. When redeeming qualities outnumber the imperfections, transform them into things of beauty that are admired for the way they reflect the sun, not the darkness. 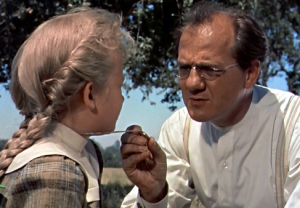 In Disney’s Pollyanna, Karl Malden’s Reverend Ford is transformed by Hayley Mills’ character when she challenges him to seek out the good in every person he meets. When her darkest hour inevitably comes, he returns the gift she gave, giving her the strength to face her own fear.

“We looked for the good in them, and we found it, didn’t we?

The book on which the film was based goes much deeper.

“What men and women need is encouragement. Their natural resisting powers should be strengthened, not weakened…. Instead of always harping on a man’s faults, tell him of his virtues. Try to pull him out of his rut of bad habits. Hold up to him his better self, his REAL self that can dare and do and win out!”

When we can comprehend the obstacles, a person had to overcome to do good things, those triumphs become even more enviable.