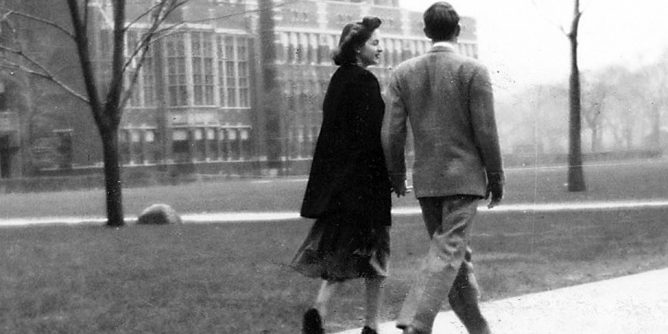 “The Real” Scott Westerman was born on this date, July 10, 1925. He was the quintessential definition of a teacher, one of those rare souls who knew what he valued and tried to help everyone who crossed his path become a better person.

When it was becoming clear that Dad was entering his last laps, we talked about his memorial service. I asked if he had any directions, since he planned Mom’s down to the last detail.

He said, “Tell em I’m sorry I can’t be there. And get them out of the sanctuary and down to the social hall as fast as possible.”

During the past two decades, Dad attended a lot of these things. We would talk about how some of the more seasoned honorees sometimes attracted few mourners.

“How do you fill a church when most of your friends have already passed on?” I asked him.

He got that twinkle in his eye that you all know so well and said, “Never stop making new ones.”

That was one of the secrets of Dad’s amazing life. He was always making new friends.

Dad loved the old adage that “Strangers are simply friends you haven’t met yet.” And boy was he good at making friends.

As Dale Leslie so aptly put it, “His face would light up with great anticipation when he spotted you in a room.”

We figured it would only take about 20 minutes to clean out the last of his belongings from his room at The Glacier Hills assisted living facility where he spent his final years. We couldn’t get out of there for over two hours. So many of the staff and residents stopped us with stories about him.

His caregivers loved him because he was always complimenting them and asking about their families and backgrounds. Even when his short term memory would occasionally fail him, he would always introduce them to me as, “one of the most talented.. and beautiful people I know.”

The many who visited him during his last few months have heard things like, “You just made my day?” or “Wow, I have discovered heaven on earth?” He loved life most when you were the center of attention. And his fascination with your adventures seemed to know no bounds.

Dr. Twylla Tassava, who cared for him during one of his visits to the hospital wrote me, “When I was visiting with him in his room during his last stay at St. Joe’s, one of the nurses walked in and he said, ‘and this young lady… I appreciate so much your expertise and knowledge in caring for me’. I have learned so much from your Dad in so few interactions. I hope I can continue to incorporate the ideals of a Westerman into my own life.”

Gayle Steiner articulates it so well. “Scott saw and lifted up the best in absolutely everyone.”

Since his passing, the family has heard dozens of stories of Dad’s influence at turning points in people’s lives. There was the young teacher who received a pink slip early in her career. When Dad heard about it, he called the woman’s principal and demanded it be torn up. She worked for the Ann Arbor Public Schools for the rest of her life.

Dad was a fervent believer in the power of diversity and creating opportunities for our institutions to reflect the people they served.

He was an advocate for women and minorities. He broke down barriers, hiring them into positions of senior leadership. And I’ll always remember the chance meeting Dad had with a Spartan who was working at EMU. “You need to meet my son,” Dad said. That lead this young man to an amazing career, finding a soul mate and a wedding that Colleen and I were proud to attend.

I ate many a meal with Dad at the Glacier Hills Manor. Residents would regularly come up to us to say what a great superintendent he had been. One woman was vociferous in her praise, putting her hand on my shoulder and stating, “Your dad was the best superintendent we ever had. Everything he did was fantastic.”

As she walked away, Dad leaned over and whispered to me, “When I was superintendent, she sued me.”

When he saw my confused expression, he gave me a perspective I’ll never forget. “If you live long enough, people will forget your mistakes and remember the good things you did. So do a lot of good things.”

One of his proudest moments was when he learned that a school in the district he so loved would bear his name.

The real magic about Dad was that it was never about him. He hated taking credit for the things that he said “just happened to take place” on his watch.

The reality is that he was never afraid to take on a challenge. He waded into the visceral issues confronting the school district in the late 60s. He refused an invitation to join a well known organization because, at the time, they did not admit women. And he was so proud when Eastern Michigan University became the largest preparer of teachers in the nation during his Deanship. Dad found success by helping us all understand that the things that could unite us could be much more powerful than the things that divided us.

He was raised in a family with high ethical standards, a love for the arts and a strong spiritual foundation. Like many of the greatest generation, he downplayed his role in World War II, even as his division was awarded the Bronze Star for their meritorious service. He wooed and won the most popular girl at Ohio Wesleyan University, continuing his pursuit after she rebuffed an early wartime proposal. “It wouldn’t be fair,” my future mother said. We always used to joke that what she was really saying was, “You’re probably gonna get killed and I want to keep my options open.”

You can imagine what amazing parents they were. Our house was continually filled with fascinating people talking about fascinating things. Ours was a rainbow of races, faiths and lifestyle preferences. Judy and I learned much about character, compassion and the rich value of diversity from our parents. We also learned important life skills; how to compile a list of license plates from every state when we traveled, what to look for in a good used car, and never making any financial decision without getting at least three estimates.

As a team, Mom and Dad transformed everything they touched, each in their own way. And even in retirement, they were fully engaged. Dad once told me that, “This not working stuff keeps me busier than when I had a job.”

Many an Ann Arbor Rotarian was likely first welcomed into the fold by Scott Westerman. He was the ultimate connector, introducing you into a mutually beneficial, often life-changing relationship. He decided to become a court appointed special advocate in his late 70s and was learning about stem cell research in his 80s. Dr. Swift reminded me this week that Dad helped pick the last three Ann Arbor School Superintendents. And whenever that new leader was was named, the Board of Education always pointed them to Dad for his institutional knowledge and his self-deprecating wisdom.

He was always open to other points of view whether it was religion or politics. Once upon a time, we were Methodists. But one day, my mother said, “I think we ought to explore other faiths.” Over the next 6 months we attended a service at just about every church, mosque, synagogue and place of worship in Ann Arbor. Imagine an 11 year old back in the days before we knew what ADD was, having to sit in silence for hour at a Quaker Friends meeting.

They decided that First Presbyterian Church was to be our spiritual home, in large measure because every pastor reassured Dad that the doctrine he wasn’t quite certain about didn’t have to get in the way of the fellowship, service and spiritual renewal he sought.

He was proud of his role in the the Church’s capital campaign and was an enthusiastic greeter until his body wouldn’t allow it. One of his last projects was inviting Presbyterians to his room to listen to Sunday Services on the radio. The group followed along with a large print edition of the bulletin and sang from a pile of hymnals he kept on his bookshelf. I like to think that his dad, my grandfather, a Methodist minister, was smiling down on him.

A favorite quote of my Fathers was that “Kindness is the highest form of wisdom.”

Kindness was at the foundation of who he was. It contributed to a life of accomplishment that guides me in everything I hope to say and do. My own goal remains to grow up to be just like him.

And that would be dad’s charge to you as we remember him on his birthday? He was grateful for his long, productive life and was mildly interested in learning what might come afterward. But he was always focused on what we could do right now, to contribute to the greater good. I can’t think of a greater benediction.

If he were here today, he would say, “Go forth and do good. Even if it doesn’t turn out as planned. Time and repetition will build a body of work that leaves everyone in a better place than you found them. That’s all that really matters.”

Dad was an avid reader of Consumer Reports. He was always in search of scientific proof that the claims made in advertisements were true. Perhaps that’s why he was sometimes skeptical of the miracles described in the bible. But if there was ever a man who truly exemplified the best Christian values, it was “The Real” Scott Westerman.

I like to envision his entry into heaven, standing before God with a look of satisfaction in his eyes, saying “Thank you, Father, for proving to me that you actually exist.”

And then, I imagine God smiling back at Dad, pointing down at the many wonderful people who’s lives have been forever impacted by this extraordinary soul, and answering, “Thank you, for proving that I exist.”