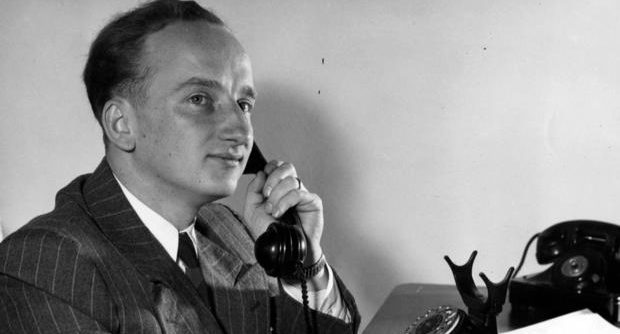 “It takes courage not to be discouraged.” ~Benjamin Ferencz.

Ben Ferencz had every reason to be angry with the world. He witnessed the horrors of World War II concentration camps first hand. Instead of simmering in negativity, he spent a lifetime seeking restitution from those responsible.

And yet, as Leslie Stahl said to him in a remarkable profile on CBS last month, ” You have seen the ugliest side of humanity. You’ve really seen evil. And look at you. You’re the sunniest man I’ve ever met. The most optimistic.”

99 year old Benjamin Ferencz is the last living prosecutor who participated in the Nuremberg War Crimes trials. He was just 27 and a Sargent serving under General Patton when he discovered, among the ruins of the German Foreign Ministry, written proof that documented the murders of 1,000,000 Jews . He knew which SS men did it and wanted them prosecuted.

The trials were already underway and there were no resources available. So Ben Ferencz got the job. Although he had no law degree and had never even been in a court room, he became the chief prosecutor of 22 Einsatzgruppen commanders at trial number 9 at Nuremberg. He prepared his case with care and executed it with precision. It took two days. All the defendants were found guilty.

Ferencz had found his purpose. He fought for the creation of the International Criminal Court in The Hague and sought restitution for thousands of WWII victims.

“My hope,” he told the Washington Post in 2016, “is that people will not be content to look at the past and say never again, and then do nothing. So I am taking the measures for preventing it from ever happening again.”

Our world is populated with both bad and good people. Our job is to do what we can to bring those in darkness into the light. As the famous prayer of Saint Francis of Assissi intones..

Ben Ferencz shows us that taking whatever action we can to alleviate suffering is the most powerful way to stay positive in a negative world.

The Zen poem, The Identity of Relative and Absolute, has wisdom hidden deep within it’s few words.

“Light and Darkness are not one, not two, like the foot before and the foot behind in walking.”

As we move forward the foot that leads is bathed in the light of new experiences and new knowledge, while the foot behind falls into the shadow of darkness. With every new step, that which was once a point of illumination darkens. If we stand still and do nothing, negativity can envelop us. If we keep moving forward the darkness inside our hearts is bathed in the sunlight of learned wisdom. Our energy is renewed. And despite setbacks, it can become easier to view the world around us as filled with opportunity.

“Keep your face to the sunshine,” wrote Helen Keller, “and you cannot see a shadow.”

The second step is to decide where, when and how you will contribute to making your corner of the world a better place.

The third step is to go out and do it. Surround yourself with positive fellow travelers and gently jettison the energy suckers. Begin the journey and stay the course.

Having a positive attitude doesn’t mean being an idealist. It’s recognizing progress and staying the course in good times and in bad. It’s staying focused on your goal, even if it’s something yet to be discovered.

Staying positive in a negative world is a mixture of attitude and action. Put both into your mind’s blender and turn on the juice. The glass you in which you pour it will always be more than half full.