“Every great dream begins with a dreamer. We each have within us the strength, the patience, and the passion to reach for the stars to change the world.” ~Harriet Tubman

I don’t know what it was that made me drive to the Haslett Village Barber Shop that afternoon in 2011. That memory has faded. What I do vividly remember is the proprietor looking closely at my face as if trying to place a recollection. When we exchanged names, a smile spread across his face.

“I know you,” he said. “You kept me company in Junior High school.”

Running the math in my head, I realized that Kevin Willett was one of the kids who listened to the radio back when there were live, local announcers who tried to build relationships with our audience. I was a college student, learning the craft, working the evening shift, trying to think of appropriate and entertaining things to say between the records.

Our teenage years are often the most tenuous and frightening years of our lives. We are too young to be old and too old to be young, expected to begin to act like adults, without the references or the clarity that come with time and experience. It’s a time when we grasp for reassurance and seek a confident voice to affirm that we, too, are valuable human beings.

If he only knew how unassured the person behind the voice he heard then truly was. “Fake it till you make it,” I told him. “That was my mantra then. It’s been my game plan ever since.”

During my next visit, he produced a record album. “You signed this for me when you came to Holt High School.”

Back in the day, radio station talent made ends meet by doing “record hops”. It was a great way to take the pulse of our audience and to meet the fascinating people who were on the other end of the WVIC transmitters.

Kevin kept that album for 40 years.

I liked the atmosphere at his barber shop. He knew every name, was the master of his art, and treated every customer like family. He provided a launching pad for young people in the trade and a stopping-off point for talent passing through town as their spouses pursued a college degree.

A college degree. That inevitably became a topic of conversation one day. It turned out that Kevin’s biggest dream was to be a Spartan, the handle we applied to people who earned degrees at Michigan State University.

As happens to many of us, life had intervened. And like many with spouses, children and a comfort zone, he had resigned himself to the idea that the dream would remain just that.

One day we found ourselves alone in the shop, his talented wife, Jannalynn, sitting in one of the long row of chairs on the opposing wall, waiting to join him on the ride home. I asked, “Why not go for it? What’s stopping you from getting the degree you want?”

The list of perceived impediments was long, but as we talked about it, none were really insurmountable. Jannalynn loved the idea. She, more than anyone, knew the sacrifices Kevin had made and wanted him to focus on something that would make him happy.

“When you love your family as much as Kevin loves us, it’s all too easy to push your own dreams into the background,” Jannalynn told me later. “I know he has so much more to give to the world. I want him to be able to do it on his own terms.”

Soul mates know where to apply the pressure. A few months later, I learned that Kevin had enrolled at the local community college to finish out his first two years of undergraduate credits before attempting to apply at MSU.

Adult learners bring a maturity and focus to things like this. They are back in the classroom because they want to be. Their grades are usually better and the real world perspective they bring with them enriches the experience for everyone. The 18 year olds marveled at Kevin’s focus and commitment. Here was a self made businessman who was reinventing himself. In many eyes, he was already a success.

“Whether you are just starting out or starting over,” he told them, “The formula is the same. We become the people we decide to be.”

When the time came for him to transfer, I spoke to Jim Cotter, MSU’s legendary Director of Admissions. I had never intervened on any student’s behalf in the past, I told Jim. But this was one extraordinary candidate who would make the institution proud.

I don’t think that my conversation carried much weight. Jim’s team judges each applicant on their own merits. Kevin made the cut with room to spare.

Thus began a long and circuitous matriculation, filled with the ups and downs that every student experiences, amplified by the work / life / academic balance unique to grown ups who decide to walk the campus with books under their arm.

The stakes were high. He was financing his own education, even as he and Jannalynn were paying for three kids to go to college. And those kids were watching. Our children model our behaviors, good and bad. If Kevin failed, how would that event ripple into the next generation?

He shoved the ever present uncertainties to the back of his mind and leaned into the buffeting winds of change. They might knock him down, he said, but they would never knock him out.

Students often confused Kevin with his professors. His gentle way and enthusiasm for learning appealed to classmates, who embraced him as part of the group. I knew most of his instructors and occasionally would ask about Kevin when I saw them. They would smile as they thought about him and share that he was one of their favorites. “A man who will not be denied,” said one. “I wish all of my students had Kevin’s commitment.”

I nodded in satisfaction. This would be an adventure on “the scenic route”. But I knew then that the degree Kevin wanted so badly would someday be his. 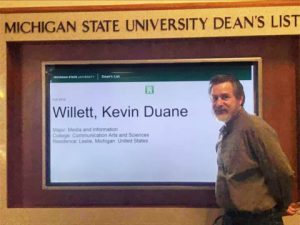 He regularly updated me on his progress, as a scholarship student might report to his benefactor. I still have the selfie he took next to the big screen at the Union Building where he was pointing to his name on the Dean’s List. That didn’t happen every term. But he slowly piled up the credits and finally announced that in May of 2019 he intended to “walk”, the code word students apply to commencement.

By then, Colleen and I had moved on from MSU. One of my own goals was be on the stage when Kevin came across it. Every year of my tenure in East Lansing, I had been up there, greeting the many students I had the honor of mentoring, being the first to shake their hand as a graduate and witnessing the love that flowed between the seeker and their support system of family and friends. It always renewed may faith in the future and made the daily grind of trying to get things done in the glacial world of academia worth the effort.

I regretted that I couldn’t be up there for Kevin. But in a way, I was. He was kind enough to decorate his mortar board with my ham radio callsign. Another of Kevin’s any accomplishments was earning his own amateur radio license, choosing KB8MSU as his brand. When he came down off the platform, he stuck a characteristic pose he associated with me, smiling and pointing at the camera that was streaming the ceremony worldwide.

After his diploma arrived, we connected on FaceTime so Colleen and I could watch him open it.

Along the way, his career path evolved. He sold the barbershop and became the chief marketing officer for a company he and Jannalynn started. He paid his dues at the college radio stations, learning that on air gigs today aren’t the same as they were when we were both much younger. And he is adding his own chapter in celebration of the Detroit radio station we both idolized, using his newly minted skills to write and produce a documentary about it.

To say that I’m proud of Kevin is an understatement. So many people cross our paths in search of advice but few have the fortitude to take action and stay the course when the road gets rough.

Kevin persevered. He never let any obstacle, and there were many, deter him from his goal.

“A man who will not be denied.”

Our days are a series of crises, separated by moments of clarity, peace and gratitude. We savor those rare nano-seconds as affirmation that our life’s purpose is being fulfilled. Kevin Willett gave me one of those moments of affirmation the day he became a “Spartan”.

It’s one of the greatest gifts I’ve ever received.

Events often conspire to shake our self confidence, triggering fear uncertainty and doubt. Kevin is living proof that the true heroes are those who ride out these storms, confident that there are bright vistas of opportunity on the other side.