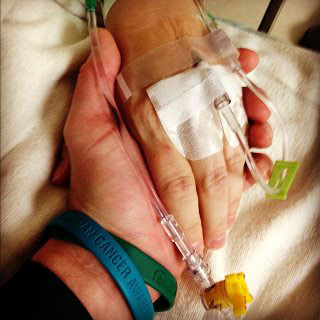 The fifth chemo is the worst. By now, you’ve watched her struggle with the poison four times. You don’t want to go to work. You want to be by her side. You want to help ease the pain. But you can’t do a damn thing about it. And that’s the worst part. The two of you actually agreed to pound her precious body six times, hoping that you’ll kill the monster without doing serious damage to the victim. That’s what you keep telling when no amount of medicine can take away the side effects.

By now, missing days of work is starting to wear on everyone. The things you have to reschedule pile up so your work days begin when you hit the alarm and immediately grab your iPhone to read the mail. They end when you look at the clock on your Mac and realize she asked you three hours ago to come hold her while she fell asleep. And you told her you would “be right there”.

By then all but the best of friends have probably had enough and would just as soon not hear about it. When they ask, “How is Colleen?” you’re pretty sure that they don’t really want to know. You answer, “Doing well, all things considered.” They don’t want to hear the visceral details. They have their own troubles. They want you to be that good listener. To ask them how they are doing. Because beneath the veneer, they hurt too.

By then, you have become numb to the nausea, her coloring, the hair that keeps falling out and the things people don’t want to read about in a blog post. Things that when you were younger, you hoped you would never have to witness.

By then, the insomnia, the inevitability of the suffering and helplessness of it all has sapped your strength. You tuck her in and ask, “are you ready to sleep?” The timber of her voice when she says, “I’m ready,” reminds you of someone else who said that to you, the day before she died. You wait and watch until her breathing is regular and she is temporarily released from the pain. That’s the moment when lose it, thankful that she’s not awake to be a witness.

That’s the worst of it. It’s that bad because you have come so far that you know exactly what will happen and when. And it’s bad because you know you’ll have to go through it all one more time.

There’s a coffee cup I keep on my home office desk. It says, “You have to experience the depths of the valley to fully enjoy the view from the mountain top.”

We moved across the country while she was sick. I started a new job. She went through chemo and got a clean bill of health. That was when she decided not to risk breast cancer and have a double mastectomy.

We were just about to celebrate not having to come back to the doctor for a whole year, when the CA125 came back a little high. We didn’t take a chance and had the scan. The cancer was back.

Once again, my beautiful wife faced down the monster. It was harder the second time, because we now knew exactly what would happen. But it was also easier, because we knew the drill. Our friends who could cope with our situation came forward to help. I missed fewer days of work, but life was anything but normal.

That was nearly six years ago. Colleen is again cancer free. She’s back on an annual check up schedule, the same as “normal” people. And we are still looking over our shoulder.

“How can you ever recover?” That’s what friends ask. The answer is, you don’t. You just learn to live with a new “normal”. A normal where any day could bring bad news. A normal where highs feel higher and lows feel lower. A normal where you have a new appreciation for every good day you are granted. A normal where relationships matter more, family comes first, life is more precious, the fear never totally goes away. In the weeks prior to the next check up, it grows and grows… until the doctor tells us that her numbers are still ok and we have another reprieve.

If cancer has a gift to give it’s this: Life is meant to be lived. It’s changed our priorities. We gave up careers we loved to be closer to we love. Titles and dollars earned mean less. Experiences with those we care about mean more. After two trips into the valley of the shadow of death, we wring every possible minute out of every single day of this second life that those who died before her have given to both of us.

Breast cancer usually gets the spotlight. But it’s had the most publicity. As we celebrate the progress in its detection and treatment, it’s important to remember that there are other cancers that attack the women we love, too. Awareness inspires education. Education inspires early prevention and treatment. Each day is a gift, not a guarantee. Make the most of them.

These are a few of the things we’ve learned. We hope our experience may help others survive, too.