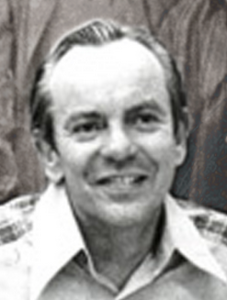 Our good friend, Hazen Schumacher, passed away on the morning of July 19, 2015 in Ann Arbor. He was 88 years young.

Hazen was one of the world’s leading authorities on the first three decades of recorded American Jazz, served on the Ann Arbor School Board at a pivotal time in the district’s history and was a teacher, mentor and friend to a generation of broadcasters, community leaders and jazz aficionados.

Hazen was my father’s best friend. He was pivotal in Dad’s ascendency to the Superintendency of the Ann Arbor Public Schools and helped guide the district through one of its most tumultuous and challenging periods of change.

For three decades, his Jazz Revisited program celebrated “America’s greatest gift to the world”. IAJRC Journal columnist Art Hilgart noted that the program, “reached millions, giving Hazen a good claim to be America’s premier jazz educator.” In the course of its 30 year run, over 1500 programs were broadcast from a record collection that grew to more than 50,000 disks. [AUDIO: Listen to a typical Jazz Revisited Program – Courtesy Bix Eiben BixEibenHamburg.com]

A beloved professor at the University of Michigan, Hazen influenced hundreds of young lives, inspiring them to stretch beyond their self-imposed limitations and maximize their human potential. He had a knack of being the right person, in the right place, at the right time, a compassionate listening ear who often provided life-changing guidance.

As news of Hazen’s passing spread across the internet, I began to hear from many people who’s lives he touched. “Hazen was a wonderful advisor to us when we founded (University of Michigan Student Radio Station) WCBN-FM in 1972,” wrote former student Ross Ojeda. “He mentored many of us.”

“He was a special teacher,” Matt Targett noted on the Ann Arbor Townies Facebook page, “and his love for the music was evident in all that he did.”

A remarkable, man. A trailblazer. A valued friend. These were common sentiments.

When my college roommate, Steve Schram, was considering taking on the leadership of Michigan Radio, Hazen was the first person he sought out. ” He generously spent time with me,” Steve remembers, “explaining the background and history of the station so I could truly measure the value of WUOM to its loyal audience. ”

Hazen was my first radio mentor, graciously opening up his world to reveal the combination of technical and intellectual skills that combine to create a broadcaster.

He was a role model for how style and substance so mix to create a personal brand. He believed that education isn’t something that only happens in a classroom and that the exhilaration of watching a team grow and succeed far surpasses personal accolades and financial remuneration.

Hazen taught us not to take ourselves, or life too seriously. He had the ego that is a prerequisite for perseverance in the most competitive environments. But he was the first to be self deprecating and to point the spotlight in the direction of those who helped put him on their shoulders, lifting him above the crowd where the world could envision the dreams Hazen helped make come true.

To become close friends with Hazen and Rusty’s children was icing on the cake. Watching each of their offspring grow has been an object lesson in parenting: encouraging individuality, working through the ups and downs and being willing to put your own skin into the game, again and again. The adults that they each have become are wonderful, eclectic testaments to the experiences Hazen and Rusty exposed them to, and the guidance they provided to all of us kids (even if even didn’t always follow it).

I recently had a chance to drive through the Lakewood subdivision that the Schumachers call home.  I noticed how much the trees had grown. I could feel them inhaling just as I exhaled, recycling the air that I breathed even as they moderated the extremes of the summer heat. It struck me at that moment that I could process all of that science, but it was Hazen and Rusty who taught me to explore the beauty of the leaves, the diversity of their design and color, and to appreciate the harmonious whole that comes together to make life not only worth living, but worth living joyfully.

The Schumachers have planted many seeds, seeds that grew to provide life giving energy, to protect others from suffering and to compel the beneficiaries to propagate a legacy of love across the ages.

This is the wonderful essence of what the these two extraordinary spirits have meant, not just to me, but to hundreds of others who had the great good fortune to cross their paths. Our world is better for their partnership. And I for one intend to model the behavior for a long time to come… with a little Count Basie in the background.

Listen to the theme from Hazen’s long running Jazz Revisited: Duke Ellington’s “What Am I Here For”.

A backstory on how Jazz Revisited came to be: