Scott’s Maxim: “When you decide to connect your brand with a high performance organization, you had better act the part.”


One of the perks of my job is that I occasionally get to travel with Sparty. Only 42 individuals have ever looked at the world through Sparty’s eyes. And what they see is an advanced course in human nature.

They enjoy the rare privilege of knowing what it’s like to be a super hero. Sparty is one of the most loved countenances on earth. He is constantly mobbed for photo ops, hugged by kids of all ages and probably holds some sort of record for attendance at weddings and birthday parties.

He also sees the seedy side of fandom.

There is a large universe of college athletic fans who get it right. They understand that it’s a game, that these are kids playing it, and that there is as much a lesson in losing as there is in winning.

Then there is what I call the “Walmart” variety. These are the people who drink to much, yell obscenities at the visitors and are quick to call for a coach’s head if elite performance is not delivered year after year after year. They are attracted to storied programs with winning traditions, but they have never spend one minute emulating the habits of the winners.

At a recent away game, I watched Sparty interact with just such a fan. He was intoxicated, obnoxious and profane. And he had a front row seat to watch Sparty perform. For much of the first quarter he taunted our mascot in the worst language imaginable and picked on our players by name at full volume.

Imagine having to respond to this… without talking. That’s what Sparty did. Through his own practiced performance, he gently played with this vitriolic soul and slowly melted his anger. By the 4th quarter, they were friends.

There are two morals to this story.

First and foremost, we live in a world where you can buy notoriety. With enough money, you can wear the shirt and get the best seats in the house.

But if you want to earn the shirt, you have to act the part.

When we were in Oregon this week to play the Ducks, the fans there were tremendous. The press wrote nice things about our program and just about everyone made us feel welcome. I posted a tweet afterwards showing our offensive lineman, Travis Jackson, leading both teams in a post game prayer on the 50 yard line. “Two great programs. Mutual Respect.” was how I captioned it. 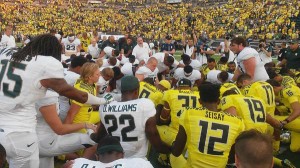 An that’s the second lesson. No matter how badly you may be treated, you don’t have to return the favor. Sparty, through his own actions, modeled behaviors that ultimately won our Walmart fan over.

That doesn’t always happen. But another thing about earning the shirt is that you eventually become part of everything good about your program. You hold both yourself and your team to a higher standard. And you are also responsible for inspiring it to remain great through your own supportive time, talent and treasure.

Teams with too many Walmart fans can suffer the opposite fate. The press to win can seduce good men and women to make bad decisions. You can’t go 11 and 1 every single year without sacrificing integrity. And integrity is the most important lesson we can teach our kids.

The last time I found myself wearing my Spartan colors in inhospitable territory, I had the opportunity to hear some Walmart jeers. “State is where you go when you can’t get in here,” was one of them.

“You guys do have an awesome school,” I answered. “What year did you graduate?”

“Good luck in the game today,” I finally said. “I hope both our teams play their best.”

So when you decide to connect your brand with a high performance organization, you had better act the part.

And whenever you run into bad behavior wearing the colors of an elite organization, take the high road.. and always remember… Looks can deceiving.