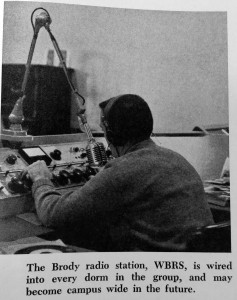 As WDBM celebrates it’s birthday, it’s a good time to remember her family. While students have played an integral role at WKAR since the station signed on early in the 20th Century, independent student radio did not emerge until 1957. That year, a group of intrepid would-be broadcasters connected an AM radio transmitter to the electrical system at the Brody Complex. Using the wiring as one all encompassing antenna, WBRS began broadcasting on 600 KHz.

The 1959 MSU yearbook was the first to depict the WBRS control room, promising that, in time, the Brody Radio Service would expand to cover a broader residence hall footprint, pulling wiring through the tributary steam tunnels that criss-cross campus. The popularity of Brody Radio attracted dozens of disc jockeys, including a future MSU drop-out named Noel Paul Stookey. Noel told us that he spent more time emceeing and entertaining than he did studying and decided to head east to seek a show business fortune. There he met Mary Travers and Peter Yarrow and soon Peter, Paul & Mary’s hit records were spinning on MSU Student Radio turntables. 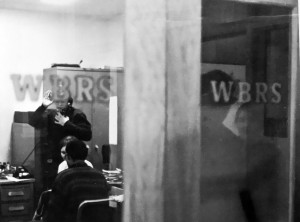 As the 50s became the 60s other stations emerged. WKME broadcast to the residents of Shaw Hall. WEAK’s ironic call letters, signifying the microscopic signals the stations generated, held court in the basement of Wonders Hall. And by 1967, McDonel Hall had its own radio voice, WMCD. WBRS was a well known brand by this time. A view through the front window of the studios was featured in the 1967 MSU yearbook. As Brody Radio’s tenth anniversary passed on, so did “Cheyenne Brody”, the original WBRS transmitter. In May of ’67, The State News ran a photograph describing Cheyenne Brody’s funeral procession. 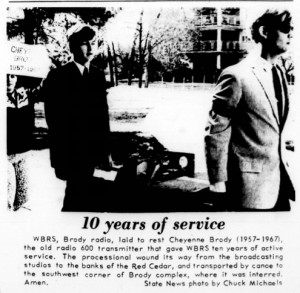 The caption read, “WBRS, Brody radio, laid to rest Cheyenne Brody (1957-1967), the old 600 transmitter that gave WBRS ten years of active service. The processional wound its way from the broadcasting studios to the banks of the Red Cedar, and transported by canoe to the southwest corner of Brody complex, where it was interred. Amen.”

In 1965, the student body voted to tax themselves each term to help fund a campus wide radio service. “The Michigan State Network” took on the call letters WMSN and began construction of studios in Room 8 of the Student Services Building. A radio board was formed and the trustees authorize $60,000 to help get the station on it’s feet. It was slow going. With the Vietnam war in full swing, the government set a limit on how much copper could be sold, and copper was the pipeline that would interconnect WMSN with it’s affiliate stations. Further delays occurred as the many subcontractors needed to construct the facility were unable to effectively coordinate their efforts. 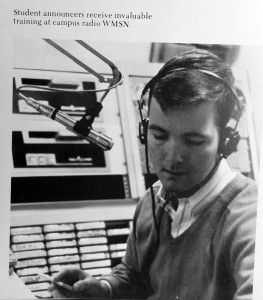 “All-Campus radio,” wrote Trinka Cline in the May 5, 1967 State News,”now serving 75 percent of the on-campus students, is the result of an idea started in 1956 to have student operated radio station at MSU.”

WBRS, WKME, WEAK and WMCD had all agreed to affiliate with WMSN and to broadcast it’s programming during certain day parts on a regular basis.

Cline’s article described the station’s format as a mixture of, ” jazz, rock, classical, folk or ‘easy listening’ depending on the hour of the day.” The diversity was the result of a survey of student listening preferences.

The 1968 MSU yearbook shows WMSN DJ, John DeGroot, cigarette in hand, in front of a back drop of tape cartridge’s and the “cart machines” that played them.

At that time, Michigan State University could hold claim to “The World’s Largest College Radio Network”, something that would endure until WKAR moved from it’s Auditorium studios to new facilities in the Communication Arts and Sciences Building. A consolidated carrier current station, WLFT, moved into the former WKAR confines.