I stopped drinking Coca Cola over a year ago. Not because I didn’t like it. In fact, I have been a Coca Cola enthusiast since junior high. I used to select restaurants based on whether or not they served Coke. I just decided I didn’t need the sugar.

Tonight, Colleen and I went out to dinner to celebrate her return from a visit with our grandson. I ordered a Coke.

The uproar of the 2.5 second scene in Coke’s Super Bowl ad of a gay couple sharing a joyful moment with their daughter reminds me of how far we’ve come, and how far we still have to go to fight prejudice.

In my long career, I have worked with people of virtually every race, culture and preference. Some of the strongest marriages I know are LBGT unions. It’s true that these pairings sometimes don’t work. But the statistics show LGBT couples are less likely to divorce. There is also no credible evidence that the children of these unions are any less psychologically healthy or well-adjusted when compared with children raised by heterosexual parents.

When I was first dating Colleen, her dad was understandably concerned. I was five years older. And worst of all, I was “a disc jockey”. Popular culture and People Magazine seem to highlight how unreliable we showbiz type were.

Luckily, I won Colleen’s parents over. The last 35 years of my life have been filled with both joy and challenge. But it’s been a much richer and more wonderful experience because I chose the right partner.

We only have to look as far as Shakespeare to learn what happens when families like the Montagues and Capulets try to get in the way of true love. As parents, we worried much more about the character of our kids suitors. Color and gender mattered only to the extent that it would subject them to intolerance and misguided hate. But it was their choice. We  welcomed their spouses into our arms and stand with them on their journey, just as we have always done, with unconditional love. 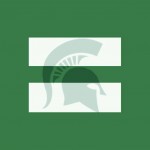 Back in the fall, I posted a Spartan themed equality profile picture to my Facebook page. It was a green and white version of the famous equal sign with our helmet behind it.

I got a note from one of our alumni saying, “Free speech is one thing, but don’t you dare diminish that logo.”

I thought of writing him back and asking what it felt like the day he was accepted as a Spartan. I wanted to ask how it felt to know that there are hundreds of thousands of people out there who think positively about him, without ever having met him, because of the character traits we agree to take on when we join the Spartan Nation.

One of those traits is inclusiveness.

How would he have felt to have been excluded because of his choice of a marriage partner?

I didn’t write him back. Actions speak much louder than words.

So I decided on that day to reaffirm my engagement with our African American and Latino alumni, to celebrate our rich and growing international alumni base, to model the tolerance and understanding that the student groups representing Arab and Israeli kids show as they collaborate with one another.

And to feel compassion for someone who is missing out on all of this, because of his own personal struggle with homophobia.

Spartans are imperfect. So is the rest of the world. The only way we can effect change is to model the behavior. That’s how we can improve the human condition; one relationship at a time.

Colleen and I were honored to support the first-ever MSUAA LBGT gathering in West Hollywood during the run-up to the Rose Bowl. When it was my turn to talk to the SRO crowd here’s what I said.

“It doesn’t matter what color you are, what ethnicity, what creed, what your religious beliefs are, what your sexual orientation is. Together we belong to one nation and that is the Spartan Nation.”

America is beautiful. We are the envy of the world because the foundation of our freedom is “that all men (and women) are created equal”. That’s why Colleen and I are LBGT allies. And that’s why I’m so proud of Coca Cola for painting a true picture of American beauty and the rich variety of humanity that defines it.