I don’t think that money equates to brains.” – Fred Meijer

If you live outside the State of Michigan, it’s a good bet that you haven’t ever heard of Fred Meijer. But for my generation, he was the definition of a great leader. For many if us, his passing this weekend is a highly personal loss.

He invented the concept of the hyper-market, that all encompassing store that Sam Walton copied and scaled into a nationwide phenomenon. Yet even as he amassed great wealth, Meijer drove an older car and lived frugally. And he remained humble. “I do not want to get into the position that people think just because we built these stores, now we ask Fred’s opinion and it is worth more than if he did not build the stores.”

According to one news report, his son, Hank, said that his father never thought he knew more than anyone else, so he trusted people to do their jobs and listened to the advice of others.

“He was a puritan with a disdain for convention,” wrote Hank in the introduction to the book Fred Meijer In His Own Words.

His obituary in the Grand Rapids Press notes that, “Meijer, though clearly a capitalist, shared some of his grandfather’s concern for the disadvantaged and skepticism of government. He was an early opponent of the Vietnam War and favored a woman’s right to choose abortion. As his wealth grew, so did his influence. He became active in the Urban League and advocated for civil rights and affirmative action.”

He didn’t always succeed. When Costco and Sams Club came into vogue, Meijer launched his own flavor, SourceClub. He closed it a year later. 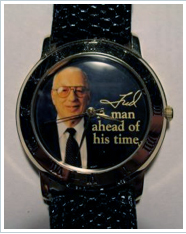 Broadcasting executive Steve Schram remembers the day he met Fred Meijer as part of an in-depth TV interview. “He was generous with his time, humble about his success, genuinely interested in those he met and demonstrated a life built upon concern for his employees, his community and a zest for spreading his good fortune unselfishly. When we finished our nearly three hours with Fred at the Northville store, he autographed one of his books for me, and then surprised me with small but cherished token of our visit; a watch bearing his image with a statement that says it all: ‘Fred –a man ahead of his time’.

“I have always recalled that day with great fondness, one that was as inspiring as it was entertaining. I have met many different leaders and executives in my time, but none that have built a legacy of a values-based family business matched by personal philanthropic commitment and goodwill. I will always remember his enthusiasm and impressive accomplishments in life, grounded in common sense and rewarded with loyalty and success from all who knew him.”

My mentor, Jim Collins, describes the essence of Fred Meijer in his essay on Level 5 Leadership.

“On the one hand… Creates—and is a clear catalyst in creating—superb results. Yet on the other hand… Demonstrates a compelling modesty, shunning public adulation and never boastful.

“On the one hand… Demonstrates an unwavering resolve to do whatever must be done to produce the best long-term results, no matter how difficult. Yet on the other hand… Acts with quiet, calm determination and relies principally on inspired standards.. to motivate.

“On the one hand… Sets the standard of building an enduring great organization and will settle for nothing less. Yet on the other hand… Channels ambition into the organization and its work, not the self, setting up successors for even greater success in the next generation.

“On the one hand… Looks in the mirror, not out the window, to apportion responsibility for poor results, never blaming other people, external factors, or bad luck. Yet on the other hand… Looks out the window, not in the mirror, to apportion credit for the success of the company—to other people, external factors, and good luck.”

For the many customers who happened to cross his path in one of his stores, Meijer will always be remembered for his kindness, his genuine interest in understanding their needs and his desire to provide the best possible life for his customers, his employees and his community. (Read the more than 1,300 condolences on the Meijer Facebook page.)

How do we inculcate these ideals into our life’s work? Meijer admitted that this can be a conundrum, “Life is better understood backwards. The problem is, you have to live it forward.”

We can’t know what challenges may we may face in our own journey. But we can resolve to try to respond to them as Fred Meijer did, executed with a laser beam focus on the people we serve, modeled in the behaviors we expect from ourselves and from others, and grounded in a value system that will enrich the world long after our small contributions have faded into history.

If you haven’t yet acquired your copy of The Spartan Life, there’s never been a better time. To celebrate the launch of Amazon’s new family of Kindles. I’ve reduced the digital price to just 99 cents. Get yours right now, here. If you already have a copy, hit the “Give as a Gift” button and pass it on! 99 cents can change a life. Let’s do it together!