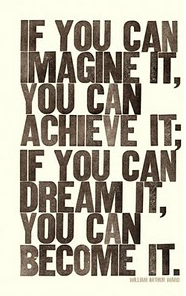 “All successful people are big dreamers. They imagine what their future could be, ideal in every respect, and then they work every day toward their distant vision, that goal or purpose.” -Brian Tracy

I had the pleasure of meeting with the board of a small non-profit recently. Their goal for the meeting was to seek a partnership for a fund raising project. It wasn’t big money and there were a lot of wonderfully caring, successful people sitting around the table.

So I played my imagination card.

I ask this one a lot. We are often so focused on just getting through the day, that we forget to use the most amazing tool in our toolbox: Imagination.

It took a few minutes, but soon the conversation began to flow like the Colorado River in Springtime. They peeled their mission back to it’s most fundamental essence and we began to surround it with ideas. By the time I left, they were thinking about the cause in a whole new way.

Here’s where the pessimists  step in with the buts. “But we don’t have ten million dollars”. “But the economy is terrible.” “But where will we find the resources to even begin to tackle this huge problem?”

My many years working for publicly traded companies taught me about pessimists. Even when you’ve had a terrific quarter, there is always some analyst out there that predicts doom and gloom. Most bosses are slow to encourage innovation and quick to throw imagined roadblocks in it’s way.

We like to hang on to old ideas even when all the signs point to the need for re-imagination. Just look at the recording industry, the Encyclopedia Britannica and the American auto industry if you need examples. These people were quick to define anything that pushed them out of their comfort zone as nonsense. Here’s what Dr. Seuss has to say about that, “I like nonsense, it wakes up the brain cells. Fantasy is a necessary ingredient in living, it’s a way of looking at life through the wrong end of a telescope. Which is what I do, and that enables you to laugh at life’s realities.” And, I would add, “discover new roads to even greater success”.

The negativity people are having a heyday right now. But history tells us that the greatest opportunity is hidden in uncertainty, wrapped in fear and is invisible to convention. This is why people who pepper their conversations with, “I don’t know,” drive me crazy. I much prefer, “I still need to figure that one out,” which tells me that the person might at least consider using their imagination.

Here are a few suggestions on how to best engage your creative brain.

What’s keeping you up at night? The economy? War? Hunger? Or is it more personal? Are you wondering how you’ll get through the week? Find a soul mate? Hit a performance target? Pass a test?

I’m convinced that every problem we face today is solvable… If we can use our imagination.