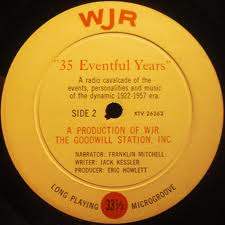 I was an insomniac during high school. Even though I packed it in at around 10, it was usually 2AM before my head cleared and the sandman entered.  My companion was the clock radio. Surfing the dial I could hear the news from Philly on KYW, from New York on WCBS, the uniquely New England vibe of Larry Glick on WBZ and some of the best rock radio anywhere from Chicago’s WLS and WCFL.

But I would always find my way back to Night Flight 760. From 11:30 pm till 5 am, Jay Roberts played “music especially designed for nighttime listening”, punctuated at the top of each hour with the Marathon News. In those days John McMurray’s weather center was a 24 hour operation. You had a live meteorologist on duty all night. Michigan Emergency Patrol, with it’s army of volunteer CBers let you know where the bumps were in the road. With the CBS network feed in cue and an array of teletype machines firing away in the newsroom, you knew that someone was out there watching over the night for you.

None of that exists anymore.

Many radio stations go on un-attended autopilot outside of drive time. If there’s a weather emergency or a breaking local news story, it has to wait until business hours. Even then, radio news is a shadow of what it used to be.

I recently found a cache of some of the music that Jay Roberts used to play. It was easy to put together a set of my ambien favorites to whisper out of the speaker stand beneath my ipod. I listened again last night. But I was distracted by the thunder from one of our uniquely Michigan winter/spring storms. I wondered if I should have unplugged the computers and disconnected my external ham radio antennae.

Jay Roberts would have told me where the storms were. He would have kept me up on the gyrations in Libya and Japan.

Radio was never just about the music. It was about knowing that there was someone out there keeping watch, that there was a real person at the controls. Someone with a phone number who we could call if we needed to. Someone who seemed to genuinely care about the human beings at the other end of the line.

My own understanding of that responsibility became crystal clear when it was my turn to man the overnight shift. At WILS in 1975, there were two of us. Me playing the hits on the AM side and, depending on the day of the week, Frank Maynard or Kip Bohne in the certified fallout shelter that was our FM studio.

Frank was Lansing’s version of Jay Roberts. I was fascinated at the care with which he rewrote his news copy, carefully selected his music, and delivered it all with the precision of a major market pro. In reality, the bosses probably weren’t listening and didn’t care. Our numbers were minuscule at that time of the night. Except for the Metro Bowl, there were no sponsors paying the light bill.

But that didn’t matter to Frank. If he made one listener more comfortable with his consistent class, it was worth it.

Things changed when the FCC allowed  a few oligopolies to control our airwaves. Station prices were bid up so high that the only way you could cover the mortgage was to cut expenses. Laissez faire regulatory policy turned a deaf ear to the spirit of the Communications Act of 1934. It seemed that “the public interest, convenience and necessity” lay in the return that these public companies could provide to shareholders. The listeners interest, convenience and necessity took a back seat.

There’s a funny thing about automation. If you can do it with a music format on the radio, you can do it without the radio. At that pivotal moment when music became free and digital copies could be played on devices 1/3 the size of a Sony Walkman, a generation had a choice:

That’s when radio’s days were numbered.

Instead of leveraging their one competitive advantage, the Oligopolists responded by plowing human capital into morning drive, pushing the edge of the good taste envelope so far over the line that the likes of Howard Stern and programs with titles like “The Morning Zoo” proliferated.

And after hours there was nothing.

I get CNN alerts on my cell phone now. The radar from Intellicast is better than anything the TV guys can provide and it’s always at my fingertips. Google’s news aggregator lets me filter out the opinion and sensation that passes for broadcast journalism these days. And I figured out how to sequence my CD library automatically, so my favorite tunes are always playing.

With few exceptions, each radio market is a carbon copy of another. It’s Cool and Kiss and Fred and The Drive, The Fan, The Zoo and Magic in every major city. It’s all the same and it’s all without a soul.

The broadcast art started to die when accountants replaced entrepreneurs in the front office. Few remain who know how to build a music set that ebbs an flows in a symphonic tide. There’s a one in three chance that you’ll hear a commercial when you turn on the radio. The 17 minutes of commercials per hour are crammed into stop sets that run longer than Stairway to Heaven.

It’s a colorless, tasteless homogeny that has all the appeal of cold oatmeal.

Could radio win back it’s audience? Perhaps. But you’d have to throw away the branded liners that everyone reads. You would need to hire announcers who actually had some expertise in the genre. You would need leadership that encouraged “intelligent flexibility” and the creativity it engenders.

Part entertainer, part teacher, part psychologist, the radio artist was a personality type that developed over decades. The best and brightest grew up to be Johnny Carson and David Letterman. Today the radio announcer is virtually extinct.

I don’t expect a turnaround any time soon.

Look at the world’s truly great companies, places like Google. The product evolves quickly to meet the needs of the customer. That was Keener 13’s secret sauce in 1963 when they rocketed from last to first in 72 days.

But the product isn’t the real secret.

I visited Google headquarters recently to learn how they do it. Googlers know the personality type they are looking for. The hire carefully and create an environment that blurs the distinction between work and play. Employees are encouraged to grow in skill and knowledge at the company’s expense. And they get to spend 20% of their time working on their own projects, projects that often evolve into money makers.

Radio would do well to emulate Google.

Because team members love their jobs, they are more loyal, more committed and more accountable. It’s an atmosphere that inevitably reverberates into the market place. Love your team and they will make sure the customer loves your company.

And the money takes care of itself.

Tonight on the airwaves, the demagogues of talk radio will try to fill us with fear, uncertainty and doubt. The robot automation systems will replay the same records over and over. The morning announcers will prep for the new day by channeling TMZ, Perez Hilton and the National Enquirer.

And I’ll be listening to my iPod.