I watched The Blind Side again this weekend. The story of Michael Oher, is, itself, is a great Monday Motivator about courage.. and honor.

Courage is believing that the heaviest burdens are given to those who can carry the weight.

It’s the realization that great things happen through passion and persistence, not position. It’s wrestling with your demons so you can hear the angels sing. It’s letting go of the familiar. It’s feeling the fear and doing it anyway.

Charles Dubois said courage is the ability “to be able at any moment to sacrifice what we are for what we could become.”

To Claire Booth Luce, it’s “the ladder on which all the other virtues mount.” 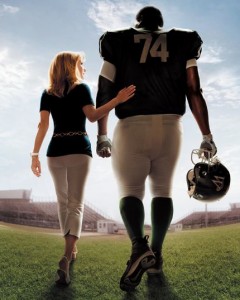 Michael Oher wrote about courage in a high school essay on “The Charge of the Light Brigade”. He ties it to another important virtue: Honor.

“Courage is a hard thing to figure. You can have courage based on a dumb idea or a mistake, but you’re not supposed to question adults, or your coach, or your teacher because they make the rules. Maybe they know best but maybe they don’t. It all depends on who you are, where you come from. Didn’t at least one of the six hundred guys think about giving up and joining with the other side? I mean, Valley of Death, that’s pretty salty stuff. That’s why courage is tricky. Should you always do what others tell you to do? Sometimes you might not even know why you’re doing something. I mean, any fool can have courage. But honor, that’s the real reason you either do something or you don’t. It’s who you want to be. If you die trying for something important then you have both honor and courage and that’s pretty good. I think that’s what the writer was saying; that you should try for courage and hope for honor. And maybe even pray that the people telling you what to do have some, too.”