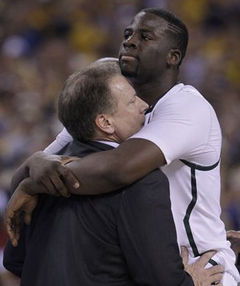 “We know we have to change a lot of things that we do as a team and as individuals… We have to go back and take a look in the mirror, realize who we are, how to do the things right that you need to do to win a championship.”

There was no complaining about the officiating, which could have been better. In fact, Draymond’s bear hug in the final seconds, probably saved coach Tom Izzo from a technical. There was no finger pointing, no whining.

Draymond Green demonstrated exactly how winners behave in that temporary space where the scoreboard doesn’t reflect the ultimate outcome.

I was across town at a sports bar hosting 200 Spartan alumni at a game-watch party. Even though the second floor was primarily ours, about 100 Butler fans were cheering, just outside of the ropes that separated us.

It was frustrating to several of our guests. Alcohol fuels that frustration and there were some tense moments where we thought that it might boil over.

I’ve learned long ago that magnanimity is the great defuser, so I worked every Butler fan in the crowd, shaking their hands and congratulating them on a well earned victory.

“Take that energy to the finals,” I said. “Win it all and you’ll make both of us proud.”

Kindness, humility and an insatiable desire to learn from mistakes. These traits typify winners.

“Magnanimous people have no vanity,” wrote Van Wyck Brooks. “They have no jealousy, and they feed on the true and the solid wherever they find it. And, what is more, they find it everywhere.”

That’s not easy to do when you have so much emotion invested in your team, or yourself.

William Temple believes that, “Humility does not mean thinking less of yourself than of other people, nor does it mean having a low opinion of your own gifts. It means freedom from thinking about yourself at all.”

I recently gave some pretty direct feedback to some colleagues. One of them wrote me to say that she was hurt by it and took it personally.

Feedback is simply that: Feedback. I told her to step outside of herself and look at the situation as a neutral third party. Digest what was useful and throw away the rest.

The more success you enjoy, the more likely it is that armchair quarterbacks will question it.

Often, some of our biggest detractors couldn’t make a three point shot, close a deal or sustain a long term relationship. As Richard Rybolt says, “There will be a time when loud-mouthed, incompetent people seem to be getting the best of you. When that happens, you only have to be patient and wait for them to self destruct. It never fails.”

Whatever you do, whether it’s playing basketball, selling something, leading others or just interacting with your world, there will be times when you will stand on stage and receive accolades. You will achieve and succeed. There will also be times when people will exploit your perceived weaknesses and challenge your results. You will have setbacks and downright lousy days.

How you react will define you.