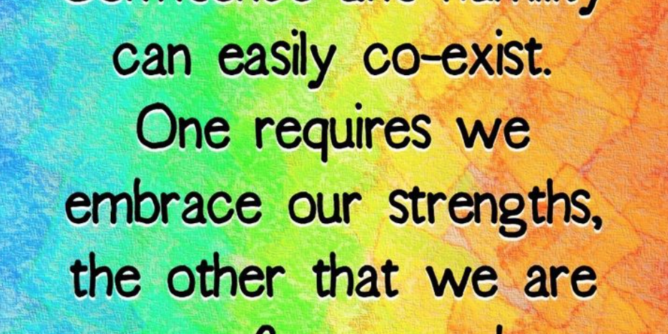 “True merit is like a river: The deeper it is, the less noise it makes.” – Edward Frederick Halifax

We are on the cusp of another renewal of the Michigan State / Michigan rivalry. I always use this event as a reminder to think about the importance of humility.

The thing I love about the fans of our two extraordinary schools is how so many of us share common roots. As I told my old friend, Congressman John Dingell at a pre-game gathering several years back, “The best thing about today’s game is that a team from Michigan will be the winner.”

And that’s what always happens.

When you are successful, and you will be, always remember that the same combination of preparation and opportunity that brought you good fortune is how Abraham Lincoln defines “luck”.

When you fail, and you will fail, remember that humility has the power to quickly put you back on your feet.

William Temple writes, “Humility does not mean thinking less of yourself than of other people, nor does it mean having a low opinion of your own gifts. It means freedom from thinking about yourself at all.”

A. Whitney Brown puts it in perspective when he says, “There are a billion people in China. It’s not easy to be an individual in a crowd of more than a billion people. Think of it. More than a BILLION people. That means even if you’re a one-in-a-million person, there are still a thousand people exactly like you.”

Humility means respecting the winners and showing compassion for the vanquished. Because over time, these role are easily reversed.

Humility means thinking twice before you speak ill of anyone. Sometimes that’s hard to do, because a badly behaving person clamours for it. Take the high road. Karma always prevails. Allow it to do its work.

Humility means recognizing and celebrating excellence wherever you may find it and accepting nothing less when it comes to your own endeavors.

There’s a funny thing about celebrating excellence. If you do, you’ll tend to attract it.

There’s also a danger associated with winning: it can be easy to fall into the same culture of arrogance that former Coca Cola president, Don Keough, warns of in his “Ten Commandments of Business Failure“

He told Spartan Jana O’Brien, “When you are associated with.. a great brand, the people just automatically endow you with a little bit more wisdom than you are entitled to have, and they give a little more deference than you deserve.”

Until you lose a few games.

There was a moment, early in my MSU career where I had the opportunity of introducing our legendary basketball coach to a room crammed with screaming fans. “How do you stay centered when you’re showered with so much adoration?” I asked before I took the microphone to bring him on stage.

Tom Izzo and I locked eyes in one of those coach / player gazes he uses when he wants to make sure you understand what he’s about to say. “Your yesterdays mean nothing,” he told me. “Underperform for a season or two, and watch the love evaporate.”

And remember the final moments from Patton, the film about the legendary general. Great moments of victory, like painful moments of struggle are temporary. All things must pass so make the most of the gift of each moment you are given in the present.

These are his own words.

“For over a thousand years Roman conquerors returning from the wars enjoyed the honor of a triumph, a tumultuous parade. In the procession came trumpeteers, musicians and strange animals from conquered territories, together with carts laden with treasure and captured armaments. The conqueror rode in a triumphal chariot, the dazed prisoners walking in chains before him. Sometimes his children robed in white stood with him in the chariot or rode the trace horses. A slave stood behind the conqueror holding a golden crown and whispering in his ear a warning: that all glory is fleeting.”

May everyone who supports an athletic team learn the gift of humility. No matter what the final score of any game may be, humility is the most important definition of a true winner.